Home Featured Products
You're using an older browser that we are unable to fully support. Your experience with our site may be less than optimal due to our focus on performance, security and reliability. Consider upgrading your browser if you have problems using our site. Learn More

This coin pays tribute to the Canadian Army and to the people of the Kingdom of the Netherlands. Order today.

The Royal Canadian Mint's ninth Battlefront coin steps away from the battle to show a child's eye view of the Liberation of the Netherlands (1945). The commemorative design shows Canada's troops receiving a hero's welcome at the end of the Second World War, when a lasting bond was formed between two nations. And like all coins in the Royal Canadian Mint's 2020 V-E Day collection, the obverse includes a special Victory privy mark.

A thoughtful addition to a military or history-themed collection. Order yours today!

Designed by artist Pandora Young, the reverse features a child's eye view of the Liberation of the Netherlands in the spring of 1945. Standing in a crowd of cheering Dutch civilians, a young girl offers a tulip to the Canadian infantryman seated on the carrier, while others have climbed onboard to celebrate freedom. The obverse features the effigy of King George VI by T. H. Paget and a Victory privy mark.

"I'm so honoured to be working on the Liberation of the Netherlands coin because of the special relationship Canada shares with the Dutch. I grew up in rural Ontario with a high Dutch immigrant population and I remember the harrowing stories my friends would tell me of their grandparents struggling to survive under the Occupation. Those stories stayed with me. On an artistic level, I was thrilled to get this project because of the technical challenges of sculpting children's faces. A child's face is plump and full of expression, and when you add the architecture in the background, this coin has it all. Really, it was a wonderful exercise in sculpting a layered relief despite having a height of only 0.35 mm to achieve this scene." Matt Bowen: Engraver

"Having been in Amsterdam on Remembrance Day and Liberation Day in 2019, I was struck by the stoicism and solemnity of the Dutch people when looking back on the Occupation. They acknowledge the past and learn from it, passing the lessons down to each new generation. Still today, they have a great respect for the Canadians, Americans, Polish, and British who contributed to the Liberation." Jamie Desrochers: Product Manager

This coin is encapsulated and presented in a Royal Canadian Mint-branded clamshell with a custom beauty box. 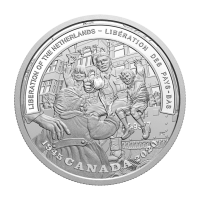