Home In Stock Products
You're using an older browser that we are unable to fully support. Your experience with our site may be less than optimal due to our focus on performance, security and reliability. Consider upgrading your browser if you have problems using our site. Learn More

The sightings continue: The Royal Canadian Mint's fifth UFO coin heads to Canada’s North for an encounter you won’t forget.

Imagine driving on a snowy highway at night and seeing a row of lights in the sky… and you suddenly realize it’s a giant UFO! This is the scene depicted on the Royal Canadian Mint's fifth Canada’s Unexplained Phenomena coin, which tells the story of a UFO encounter in the Yukon. On the night of December 11, 1996, at least 31 people in four different areas reported seeing a UFO in the sky. The bright lights described by the witnesses have been re-created on this rectangular coin’s reverse, where a more complete picture of the giant UFO comes into view when the black light paint technology is activated.

December 11, 1996: It was a clear and cloudless night when a motorist driving along Fox Lake (Kwätän ’aya) on the Yukon’s Klondike Highway noticed a bright and unusual light. As he got closer, he observed a group of rectangular lights moving east in the sky. About a half-hour later, motorists in two separate cars also spotted a row of lights and got out of their cars to get a better look. Within minutes, the UFO was almost directly above one of the witnesses, who described a large white beam coming from the centre of an object the size of a football stadium! Two more witnesses travelling from the other direction provided a similar description (with additional flashing lights), while a sixth witness saw multicoloured lights.

Earlier that evening, four people driving north towards Carmacks had observed a UFO with three flashing orange lights and several small white lights arranged in an elliptical pattern—a description similar to the one provided by a family of five who viewed the UFO from their house in Carmacks.

Near the village of Pelly Crossing, a trapper described seeing the same row of lights, as well as a luminescent green beam and two more rotating ones. Four women observed the UFO while taking a break from classes at the community college, and two more local witnesses compared the length of its lights to the width of the Big Dipper.

And finally, in the village of Mayo, the strange lights were observed by at least eight more witnesses, including out-of-town hotel guests and several teenagers who similarly described the mysterious object as being very large.

What was it they saw? All we know is that a large UFO, one of the largest ever reported, was seen by multiple witnesses that night, and all within a short timespan.

Each coin comes with a black light flashlight, which activates the technology embedded in the coin’s reverse design. When viewed in normal lighting conditions, the coin shows the mysterious lights that appeared in the night sky; when the black light paint technology is activated, the full shape of the giant UFO is revealed!

Like 2020’s The Clarenville Event coin, this 1 oz. 99.99% pure silver rectangular coin features a horizontal orientation, which emphasizes the size of the Fox Lake UFO.

The obverse’s wormhole-like pattern is a nod to the UFO theme.

The reverse design by Canadian artist Neil Hamelin features the artist’s rendition of a 1996 UFO encounter on the Yukon’s Klondike Highway, near Fox Lake (Kwätän ’aya). In this wintry scene, two motorists have pulled over to observe the mysterious lights in the night sky. The lights are amplified by black light paint technology; when activated, the effect provides a more complete picture of the huge UFO that was spotted in four different areas on the night of December 11, 1996. The obverse features a wormhole background and the effigy of Her Majesty Queen Elizabeth II by Susanna Blunt.

Each coin is encapsulated and presented in a black Royal Canadian Mint-branded clamshell with a black beauty box.

ABOUT THE ROYAL CANADIAN MINT 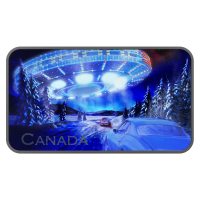