Home Silver - Royal Canadian Mint
You're using an older browser that we are unable to fully support. Your experience with our site may be less than optimal due to our focus on performance, security and reliability. Consider upgrading your browser if you have problems using our site. Learn More

Leader of the Métis Nation. Father of Manitoba.

In issuing the 2019 Special Edition Proof Dollar, the Royal Canadian Mint acknowledges, honours and celebrates the unique history of the Métis Nation. The Royal Canadian Mint would like to express their sincere gratitude to President Clément Chartier of the Métis National Council, President David Chartrand of the Manitoba Metis Federation, and Mr. Norman Fleury, for their guidance and collaboration in this tale of two nations whose histories are intertwined.

This year's special edition proof dollar highlights the contributions of Louis Riel (1844-1885), and those of the Métis Nation, to the story of Canada. A defender of Métis rights and a catalyst for change, Louis Riel was born 175 years ago in Saint-Boniface, in the province he later founded. In fact, it was 150 years ago that the National Committee led by Riel drafted an initial list of rights for the Métis Nation—a declaration in which land claims and language rights were preconditions to Manitoba's entry into Confederation.

This coin, which commemorates Louis Riel's place in history, is a celebration of the cultural legacy of the Métis Nation and its resilience. The struggles of the past haven't disappeared; they continue to echo through generations. There is hope, however, through the acknowledgement of Canada's troubled history and in the recognition of a founding people's sacrifices.

Design: Designed by Métis artist David Garneau, your coin features a portrait of Louis Riel (1844-1885). The Métis Nation leader and founder of Manitoba is wearing his fur-trimmed buckskin jacket, which is adorned with traditional floral beadwork. His Coventry sash forms one looped half of the emblem of the Métis Nation: an infinity sign that represents the unification of two cultures (European and Indigenous) and the immortality of the Métis Nation. The sash bears Riel's title in three languages: Michif (NIIKAANIIW POOR LA NAASYOON LII MICHIF), English (MÉTIS NATION LEADER) and French (CHEF DE LA NATION DES MÉTIS). An engraved reproduction of Louis Riel's signature appears below the word “CANADA”, the year “2019” and the face value, “DOLLAR”. The obverse features the effigy of Her Majesty Queen Elizabeth II by Susanna Blunt.

“The Royal Canadian Mint's coin pays fitting tribute to the eternal leader of the Métis Nation. Louis Riel's vision and sacrifice not only shaped the struggle of the Métis people to secure their place within the Canadian Federation but also gave birth to western Canada itself.” Clément Chartier, President of the Métis National Council

“'My people will sleep for 100 years, and when they awake, it will be the artists who give them back their spirit.' While scholars have yet to determine when or if Louis Riel said this, it is a sentiment that motivates many Métis artists, including me. Political action woke the Métis in the 1960s-80s and drove the leadership to have us recognized in the Constitution. It is now up to the painters, sculptors, poets, musicians, authors, filmmakers, beaders, and other cultural workers to awaken the Métis spirit and deepen the expression of contemporary Métis identity. I feel this responsibility keenly. I am honoured to have participated in this coin design. It remembers and honours not just our leader, but also the resilience of the Métis people.” David Garneau, Artist

Louis Riel (1844-1885) Louis Riel was born on 22 October 1844 in Saint-Boniface, in present-day Manitoba. During the Red River Resistance of 1869-1870, the Provisional Government of Assiniboia (under Riel's leadership) negotiated Manitoba's entry into Confederation, which was contingent on the recognition of Métis rights and land claims. While the Manitoba Act became law in 1870, the execution of Thomas Scott cast a pall over the provisional government and Riel was forced into exile. He returned to Batoche (Saskatchewan) to lead a second armed resistance movement, the 1885 Northwest Resistance, which ended in defeat against federal troops. He was charged with high treason and hanged on 16 November 1885. Today, Riel is remembered as a champion of Métis nationhood and rights, and since 1992, the founding father of Manitoba. 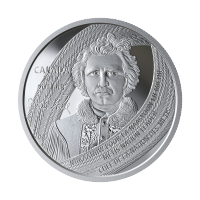