Home Silver - Royal Canadian Mint
You're using an older browser that we are unable to fully support. Your experience with our site may be less than optimal due to our focus on performance, security and reliability. Consider upgrading your browser if you have problems using our site. Learn More

Born on a drafting table a century ago, the legacy of Bluenose was set in motion. The year 2021 marks the 100th anniversary of the launch of Bluenose, the Grand Banks fishing schooner whose racing feats and indomitable spirit earned it the title of "Queen of the North Atlantic." The first port of call in RCM's year-long celebration, the 2021 Pure Silver Proof Dollar turns back the clock to commemorate Canada's sailing ambassador, and the visionary naval architect behind its design. The Bluenose story begins here, born on a drafting table a century ago. And with the mixing of different frosting techniques (flat and traditional), your coin's engraved design simultaneously celebrates William J. Roué's vision and its fulfillment, with the birth of a racing champion.

Celebrate a beloved icon that outpaced its challengers and secured a permanent place in our hearts! Order today!

Coin Design: Designed by Canadian marine artist Yves Bérubé, your coin's reverse travels back in time to see naval architect William James Roué (1879-1970) completing his design for the legendary Bluenose schooner. The first-person perspective is flat frosted to distinguish between Roué's vision and the inspiring sight of Bluenose under full sail. As an added tribute, W.J. Roué's signature is included as it appeared on the original Bluenose sail plan. The obverse features the effigy of King George V by Sir E.B. MacKennal. Learn more about Canada's best-known naval architect and designer of our national icon. "It doesn't matter which part of Canada you are from, it represented us all—and still does. I can't imagine a Canada without the Bluenose. I spent a good part of my life at sea, and so did my family. For me, the Bluenose is more than just a ship, it is a proud, beautiful symbol of history and tradition on the East Coast, where it represents every sailor, fisherman and shipbuilder." Yves Bérubé, artist

"The Proof Dollar is a significant undertaking that demands one's undivided attention and passion. The narrative surrounding the Bluenose is far-reaching, and it is a true honour to tell. My hope is that all Canadians, coast to coast to coast, will feel re-inspired by its story, and will enjoy this anniversary as much as I have." Matt Eggink, Product Manager, Royal Canadian Mint

"Bluenose is near and dear to myheart. I am a proud Nova Scotian, but the familial connection to the story makes it that much more special. The 2021 proof dollar helps keep my great-grandfather's legacy alive and represents an opportunity to re-educate Canadians on the significance of the vessel on the back of our dime. Seeing his signature on this coin is incredibly moving and very personal for the Roué family." Joan Roué, great-granddaughter of William James Roué and author of "A Spirit Deep Within", the story of Bluenose and its designer.

"William James Roué is Canada's most famous naval architect. His iconic Bluenose, launched in 1921, became and remains a famous symbol in Canada and abroad. During the 1920s and 1930s, Bluenose came to represent not only Nova Scotia, but Canada as well. The history of this schooner and its skipper Angus Walters, competing in the International Fishermen's Trophy races, has entered Canadian lore and continues to fascinate us today."Dr. Jeff Noakes – Historian, Canadian War Museum

"Bluenose represented a marriage of labour and recreation. Its success transformed public perceptions of fishermen, broke down social and cultural barriers, and transformed our national identity. A hundred years after Bluenose was launched the vessel has continued to develop in significance and has retained its status as a Canadian icon and symbol of pride." Adrian Morrison, Curator of Collections, Fisheries Museum of the Atlantic

Building a legacy: William J. Roué (1879-1970) The story of Bluenose begins in 1920 with the creation of the International Fishermen's Trophy series, established to pit Nova Scotia's fishing schooners against the rival New England fleet, After an unexpected loss in the inaugural race, a group of Halifax businessmen set out to win back the trophy in 1921 by returning with a new, faster vessel. William James Roué was entrusted with the task of designing a vessel that could both earn its keep as a fishing schooner and bring the Trophy home. Born in Halifax and based in Dartmouth, N.S., Roué then worked at the family's soda manufacturing business pursuing his passion for naval architecture in his spare time. Largely self-taught, Bluenose was only his 17th design and first fishing schooner, and the one that first earned him international acclaim. Using a mathematical approach, Roué gave Bluenose the ability to carry a large amount of sail and a hull shape which would cut through the water with the least resistance, and they carried it to victory on the fishing banks and on the race course! Its success allowed Roué to turn his passion into a profession. In a career lasting more than a half-century Canada's first and most famous naval architect designed some 200 vessels, including an innovative sectional barge for Allied military use in the Second World War.

The Builders: Smith and Rhuland: Shipbuilding is one of Canada's oldest industries and a proud fixture of Atlantic Canada's seafaring traditions – especially in Lunenburg, Nova Scotia, home of Bluenose and a UNESCO World Heritage Site. The South Shore community was already a busy shipbuilding centre when Smith and Rhuland Shipyards opened in 1900. Known for its versatility and fine craftsmanship, the firm was awarded the contract for Bluenose in 1920. Its yards became a hub of activity and excitement as the finest shipwrights set to work using lumber from Nova Scotia, while local craftsmen stitched the sails and forged the hardware. In addition to Bluenose, Smith and Rhuland Shipyards built, launched, repaired and restored hundreds of vessels – tugs, trawlers, freighters, yachts and Grand Banks schooners, and even a famous replica of HMS Bounty. Its facilities on the Lunenburg waterfront, including the Big Boat Shed came under new ownership in the mid 1970s, but the Smith and Rhuland name remains synonymous with "the pride of Lunenburg."

A blueprint for success: The hull profile engraved on your coin's reverse pays tribute to Roué's original design. Using the original hull profile blueprint the Royal Canadian Mint created a mirror image that aligns with the portrait of Bluenose under full sail. 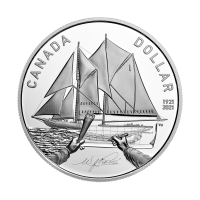